Islampur College, which started its journey on the 4th of December 1973, has developed into a prominent institution for higher education not only in the Islampur Subdivision but also in the entire North Bengal.

Originally established by local initiatives with a view to spreading education among the suburban population of Islampur, the College has earned its strong academic reputation through its rigorous commitment to academic excellence.

After India’s independence from the British rule, Islampur was under the Purnia district of the state of Bihar. When the Bihar and West Bengal Transfer of Territories Act came into existence in 1956, Islampur was transferred from Bihar to West Bengal to form a new subdivision under the then West Dinajpur district. Since then Islampur has gained importance both strategically and economically though the mainstay of the life of the people by and large is agriculture.

The College is situated at Ajitbas Colony, Islampur, on the National Highway no. 31. The College campus with its two imposing buildings forHumanities and Science, the Boys Hostel and the surrounding green fields presents a unique view.Islampur College, at present, is affiliated to the University of North Bengal. Over the last 40 years,the College has emerged as one of the leading educational institutions of North Bengal. The college presently courses in all the three streams i.e. in Arts, in Commerce and in Science.

Apart from the students of the locality and the adjoining areas of Islampur, students from Kishanganj and Purnia districts of Bihar and also from Darjeeling district of West Bengal are found getting admissions regularly in the College. Besides its continued dedicated work to the cause of education, the college makes it a point to cultivate moral values among the students irrespective of caste, creed and religion through its N.C.C, N.S.S. and other regular co-curricular activities. 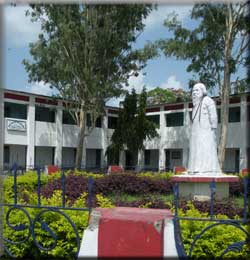 To enable the college to function as a torch bearer among the Poor and Under Privileged masses by providing quality higher education and leadership quality.